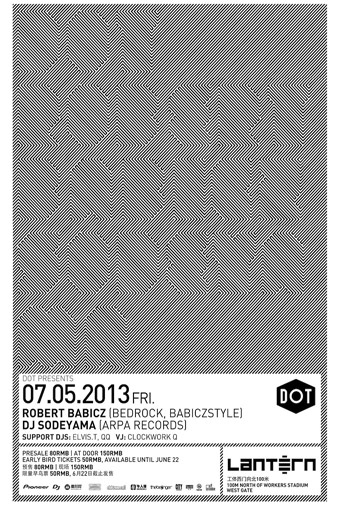 Last seen rocking the dancefloor in Beijing back in 2011, the German maestro blew the roof off The House and DJ Sodeyama cracked the dancefloor of Lantern, with their dynamic live show taking us on a melodic yet tuff journey through techno, house, minimal and of course acid!

Robert Babicz’ musical output is inspiring and staggering. A true one-man operation, he writes, records and performs solo; commanding an ever-expanding touring schedule, tailoring the music he creates to the cities he visits. His trademark anthem “Dark Flower” was one of the most played tunes cained by progressive and techno DJs alike, not to mention other bona fide dancefloor bombs such as “Sin”, his remix of Way Out West’s “Spaceman” and Gui Boratto’s “Mr Decay”. But that’s only part of the puzzle, Babicz’s art is comprised of more than just his music. He films everything. Using his music to open doors and build relationships with people in only the way music can, he then records his experiences and interaction on film, both still and moving, later editing the images together as a picture track to his audio.

DJ Sodeyama is a leading pioneer in the modern minimal techno music. The veteran has had 15 years of experience under his belt. Ever since he release his first album “Metal Heart” on his own imprint “U-Rope” he established himself as a Japanese techno master and received considerable amount of offers from the world famous labels, and eventually had a several hit releases under Italian label Zenit. His release on Archipel was highly praised by techno legends such as Laurent Garnier and Luciano. In 2001 he founded Arpa Records which instantly grabs everybody’s attention by its significant releases including some of the most in-demand producers at the moment such as Radio Slave, Nick Curly, Glimpse. With one hit after another Arpa Records has earned itself a solid spot among the world’s finest music outlet.

Robert and Sodeyama are always on the move with their live shows and mastering techniques – don’t miss this opportunity to catch a booming dancefloor!

What are the factors in choosing a supplier?